Last night  recieved a call from the order of priests nearby us known as Miles Christi. And like last year, they are holding a Fellowship Day for all the "veterans" of the Miles Christi Camps and any other people who wish to come. They have confessions, talks, adoration, films, and the biggest event of the day, airsoft! Considering the name of  their order is Miles Christi (Miltary of Christ) I think it appropriate don't you? :P

So, we want to go, as David and I are "veterans", and are probably going to! Fourtunately I just got my AK74 and P226. Can't wait 'till tomorrow!

-The Pimpernel
Posted by Unknown at 6:02 AM No comments:

Piano Lessons... hm... what could be said on the bright side... Ah yes! I learn to play maginificent pieces such as the itsy bitsy spider! lol. Just kidding. I haven't played that one yet... :P No, I actually kind of like it. Also, our recital is coming up and was commanded to finish composing the piece I've been working on and to play it for the recital. So, I have. As a few of you know, I mainly compose pieces which could be used in movies. So, I have composed a piece which would serve as a modern day film's main title. All rights reserved. :P If we ever make a modern day film I could use it, but until then it's up for grabs if anyone wanted to use it... I'm going to film meself playing it and post it whenever I have the time, and I need some good critics. Lol. Also at this moment, we are thinking of Grail Lords and whether or not it will be possible. Lots of complications. Mainly financial. Oh boy... producing is fun... >:(

-The Scarlet Pimpernel
Posted by Unknown at 10:11 AM No comments:

Of Dandelions and Operation: Viper

I hate 'em. We literally have MILLIONS of dandelions growing on our 5 acres of grass! They're everywhere! Buggers... Luckily, the ducks and geese eat them, but not all of them. SO we're stuck with the millions they don't. We'll probably have to mow them down! With guns! I wish... So, later today we're hoping to have an airsoft game and/or film our squad, as I said earlier, to give you an idea of what are squad is. Also, my AK74 arrived yesterday and it works great! Can't wait to play Operation: Viper which I've been planning for quite some time... It will be a game between US Army Delta Force and a home defense team. Delta must capture 3/4 packages and move them to extraction point. So far, we have temporarily put everybody on teams and it's looking like I'll be on Alpha Squad in Delta Force. Can't wait! For some readers of my blog who don't like airsoft, my apologies for rambling on about it, but it just happens to be my favorite sport...

So anyway, can't wait to see if we can do Viper, and I hate dandelions.

-The Scarlet Pimpernel
Posted by Unknown at 3:30 PM 1 comment:

Yesterday was great! We went to early Mass in the morning then headed home for a meal of eggs, gravy, bacon, etc. Throughout the day we ate snacks, took walks, played volleyball, opened some presents, and viola! An awesome Birthday. I recieved my WE F226 Gas Blowback, and it's awesome! This week we'll be filming and taking pictures of the Knight's Templar Elite so you will see us in semi-action. My AK74 I ordered along with 4 extra mags should be arriving tomorrow. But anyway, yesterday was grand, and I gotta run. Bye!

-The Pimpernel
Posted by Unknown at 4:30 PM 3 comments:


I couldn't post this along with my orecent post, so I am posting it seperately. You probably have to watch it in full screen.

If this doesn't convince you that airsoft is awesome, then oh well.
Posted by Unknown at 12:17 PM 5 comments:

I know, I know. I'm a little late. Homeschool standard time. I have been retired from blogging for a while... since December it would seem... other then Lord and Lady... but, I HAVE COME BACK TO LIFE! Or words to that effect... So, I'm back. And back I will stay!

As of late, we have been swamped with school, lent, Easter, films, and, funnest of all, airsofting! I love that sport! Some call it strikeball, or softnose, but that's what we've been doing. As you know, our squad was formed sometime in December when we each received our camo and each received our call signs: Abbot, Deacon, Monk, and Reverend. Since our squad is called the "Knights Templar Elite" we thought it appropriate to use religious names, as the Knights Templar were a military religious order. Airsofting is awesome! Don't believe me? Oh well. Anyway, that's what we've been doing alot of. Recently, I sold my old JG MP5 MOD5 and bought a Dboys AK 74 which should be arriving sometime soon. Also, for my birthday, this Sunday, I will also be getting various other airsofting equipment. Fun!

So, other then airsoft, we're having a movie night tonight with our friends and that should be a blast. Still don't know exactly what we're going to watch though. One thing I absolutely detest about movie nights, is they usually have to be on Fridays... Fish Days... 'tis a downside. But, my hope is unstirred that my Mom is the best non-meat chef ever.

I also read the Silmarilion for the second time. Understood it alot more this time. I think there are parts which need to be made into movies (Beren and Luthien or the Fifth Battle of Bereliand), but overall, the book is so good, no one could some of the magnificent parts justice. ESPECIALLY not Peter Jackson. Everyone always says "Peter Jackson is the best director ever!" ...not to trivialize Lord of the Rings or how great it was, but Jackson is a horror movie director. Many parts or shots inside of LOTR could have been cut out (E.g. the orc head on a spear, the breeding scenes, etc.). Again, not to say the movies are bad, which would be false, but I just find it annoying when someone has to says something about a good director and immediately thinks "Peter Jackson!" Well... that was kind of rambling on...so, back on subject, I love that book.

Weather has been quite nice this year. Winter was mild and Spring came early. Love it! I truly hope that repeats itself. But I doubt it. Gotta go! 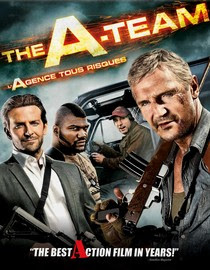 Yes, I have been busy and haven't been posting for a while. Most of the time I've been busy with the final stages of The Crusader's Tale, but I'm done now. So, on to the review.

I loved it! Awesome! Amazing! I have to give it 4 stars! Firstly, the plot was probably a 4 star plot and not a 5 star, which is pretty good! It was action packed! And I like that!

Second, the acting was 5 stars! Liam Neeson is one of the best actors in Hollywood, other then Russel Crowe.

Thirdly, the screenplay and music was amazing!

I love remade films which keep alot of the aspects from the original. The music was still the same, Face, unfoutunately, was still Face... which is a little bit of a sad thing. Murdock was... nuts... B.A. was still the guy you don't wanna mess with. And Hannibal was ALOT better then the original Hannibal as he didn't call each and every bad guy a "slimeball."

The reason I can't give it 5 stars is because the language needed to be cut down. The last thing I want to see during an aweosme firefight, is cussing drowning out the sound of gunfire. Also, Face, as I said, is still a womanizer. They needed to cut it down a little bit, if not cut it out alltogether.

All in all, I would recomend this film if your ok with intense action, but, unfoutunately, you can't get rid of the language. So, if you wanna see this film, just know it's in there. Also, if you have watched the original A-Teams and found them to be a little lacking, then this is the film for you. And I'll just close with,

I was planning on taking pictures and posting them in my Christmas Post, but I couldn't. So, I'll have to do without it. So, Merry Christmas!!!!! I, indeed, had a glorious one! With much airsoft, fencing, and board game fun. We attended the Midnight Mass and then opened our gifts the next morning. Now, for today, Happy New Years 2012! I still have yet to make a New Years Resalution, but I will think of one. So, again, I say, Merry Christmas and a Happy New Years!!!

One More Day 'Till Christmas!

Can you believe it!!! 'Tis time for my annual christmas video!!!! It is here:

Posted by Unknown at 1:30 PM No comments:

You're kidding! Oh boy! I better hurry up wit stuff! Wasn't it Thanksgiving yesterday! I gotta catch up with stuff... But at least we're off of school! Wahoo! I don't know why, but holidays seem to sneak up on me... Grrr... Well, I don't really mind since they're fun anyway. Although, I seem to enjoy waiting for the holidays! You know what I'm sayin'? It's so enjoyable waiting for the holidays to come! The excitement, the anxiety, the... just the... I don't know. I just love it! Well, Merry Christmas, and a Happy New Year!

Posted by Unknown at 2:58 PM No comments:

Yes, TCT Part 1 is out! If you wanna see it, please visit our website. I ask you, again, to spread the word about The Crusader's Tale and Lord and Lady Productions!!!

Posted by Unknown at 7:08 AM No comments: