An award for followers

I have been tagged for the first time by Kathleen Pevensie and now, I tag all my followers and award them with these awards. 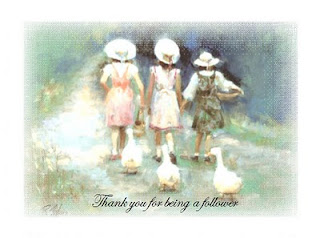 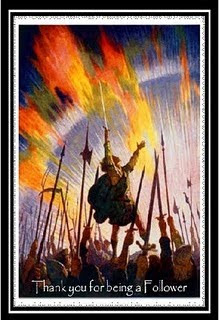 1. Tell all your followers how long you have been blogging.
2. Then tag all of your followers unless you have LOTS, then, if they follow you closely enough, they will swing by and pick it up on their own.
I began blogging almost a year ago. January 12, 2009. I began at THE ADVENTURE CONTINUED which now bears the name of: ALOT O' CELTIC NONSENSE ABOOT...NOTHIN'
on this blog I wrote a book named the same original title of the blog. This story showed the continuation of The Lord of the Rings. This story took me almost three quarters of a year. When I finished I began to write things of no importance. Hence, after a few months, the said name which it bears now came about. On October 13, 2009 I recieved from the gracious hands of Rose Marchen a playlist which now sits at the bottom of the said blog. It has not changed. On November 19, 2009 I made a google email account and started the Blog I am writing on.
This seems a long story, and it is. It would seem as if perseverance and mear enjoyment has kept them running, however, nothing would have given me more perseverence and enjoyment than my loyal followers who, as Rose Marchen once said, "Would die for me eh, I doubt it". I thank you all for your encouragement especially to Rose Marchen who has helped me many times with my blogs and Kathleen Pevensie who has tagged me for the first time. My thanks!
~ The Pimpernel, who is ever thankful to his followers.
Posted by Unknown at 8:57 AM 1 comment:

Well, ladies and gentlemen, the season is over. The season we have been looking forward to for so long is finally at end. I am happy to say that, though it is upsetting, I am sure that the many people around the world have given great pleasure to the Infant Jesus. As for myself and my family, I had a wonderful Christmas day. It seems that the song, "Chestnuts roasting over an open fire", had stated truly, "little people will find it hard to sleep tonight". For, yes, I was unable to get myself to sleep for more then four hours. I truly did not understand the unfortunate incident. I did not feel so exited, but at night it is easy to convince yourself of many things. At precisely 7:40 I, and my siblings, sang a song of praise to our lord, who was now born. We descended the stairs and made our way to the living room. Their, on the burgundy carpet, lied many wrapped presents. We finished opening them around 10:00 and we began the Christmas breakfast which consisted of a Coffee Cake and many Egg Burritos. A meager meal, it would seem, but it tasted quite nice to myself. While eating, my sister, Hannah, turned on her soundtrack of "Les Miserable" and my other sister Vicki put on her soundtrack from the Movie, "The Phantom of the Opera". After breakfast, the best music began to play. I turned on my new soundtrack of one of the best movies ever made, "Braveheart". At 2:00 we had friends over and we enjoyed a large dinner and I, being used to doing so at birthdays, put on a regency outfit and became a Waiter. The day ended nicely with the Jesse tree and we went to our beds.

'Tis Christmas day! We have made it at last to the birth of our Lord, Jesus Christ. On this day I praise our Lord and say, just as Tiny Tim observed:

Today is the Eve of the Eve of Christmas Eve! Two more days until Christmas! However, I don't know if I'm going to be able to post anymore for a few days so, I'll say right now,

'Tis the Eve of Christmas Eve!

One more Sleep Till Christmas

Posted by Unknown at 2:47 PM No comments:

I have just watched one of the most awesome civil war movie ever: Gettysburg. This movie showed one of th most bloodiest battles in American history. The music in this movie was breath taking. The lines were very good but some could have been a bit better. I was amazed because their was no bloody scenes. A bullet would fly into a person but no blood would come out. I absoltely loved this movie.


Here's an example of the music.

Here was a scene that really showed how desperate this battle was.

These "mutineers" were men who had seen so many battles tha they decided not to fight anymore and no one could change it exept this colonel.

This is July the third, the last part of the battle of Gettysburg. Their is no blood in this. But if you want you can have an older person watch it first.


This one does have one bad word in it right at the beggining so if you could just push the mute button until after the first line is spoken, I would be grateful. 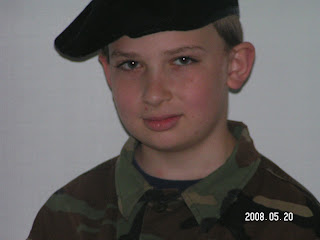 Ladies and Gents, (Even though I have no gentlemen, other than my good self, following my blog) I wish to announce that my brother David's Birthday is coming up! He is having his very first birthday party as well. Unless you consider the party that he had when he was zero years old. We are having over many good friends of ours, and his of course. The theme of the said party will be Piratical. Some people will be Pirates and others will be Pirate Hunters, or Privateers, or Soldiers. It will be a wnderful Party! Our basment is all decorated and we have many, many games ready. The games will be: Cream the Brit, Blow up the Ship, Steal the Pot o' Gold, Walk the Plank, Fish over board, and Dodgeball. Well I have to go work on the games so I wish my brother a very Happy Birthday! 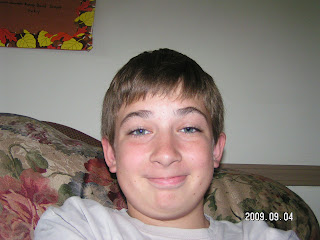 A RECENT PIC OF DAVID 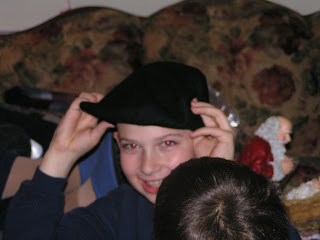 David getting in Uniform 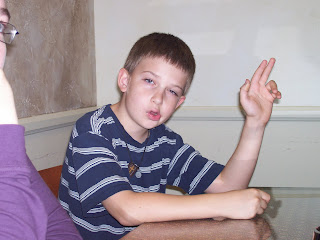 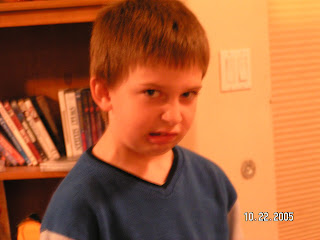 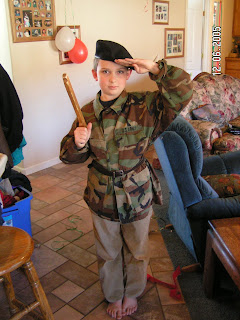 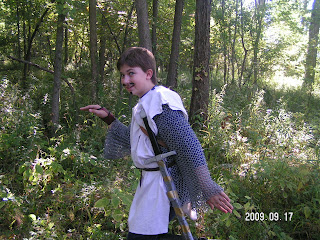 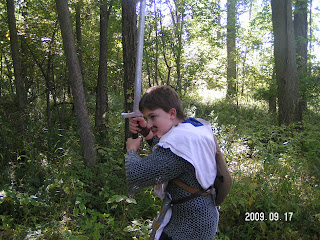 In the part of Sir guy de Lenclin again